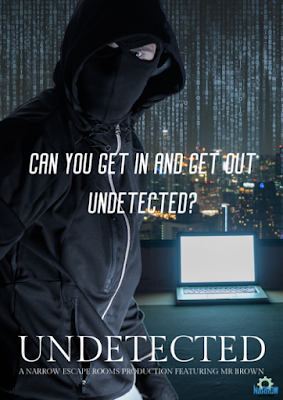 Undetected was my 161st room to date.  The theme of the room is as follows:

Narrow Tech Systems is largely known as being at the forefront of scientific discovery.  Your team has been handpicked to steal a revolutionary piece of technology that will change the world. It’s the Biggest Score of your lives, it’s your chance to prove your skills. Stealth is key to the success of this operation. Can you get in, steal the item and get out Undetected?

As the game summary sets out, Undetected involves players trying to break into a building to steal special technology.  Here’s what we thought about Undetected:

My team really enjoyed Undetected.  As a team of geeks, we really enjoyed the various easter eggs and geek references throughout, as well at the interesting puzzles and storyline.

Since playing Undetected, I had the pleasure of catching up with owners Shelley, Craig and Kit at an escape room enthusiasts catch up in December 2021.  It was awesome to talk about all things escape rooms, as well as 1980s and 1990s PC adventure games that we loved.  We also spoke about some potential future escape room plans for Narrow Escape, which sounded exciting.  I also (very subtly) pitched my own thoughts on great room ideas ;-)

Overall Rating:             A fun, geek-lovers room with interesting puzzles and lots of tech