I was contacted by Alex, a film writer and director in October who invited my team to come along and try out a new escape room adventure that he had written.

His room, called The Art of Murder, is located in a quiet street in Marrickville in Sydney’s inner west.  Unlike most escape rooms where the objective is to escape a room (or rescue a person/item, break into a room, defuse a bomb, etc), The Art of Murder requires players to solve various puzzles to help gather evidence in a murder investigation.  Here is the summary of the experience from their website:

THE ART OF MURDER
An immersive escape room / alternate reality theatre game.
A wealthy old lady has been murdered, her young lover stands accused.
Your small group of investigators enter her magnificent home to build a case.
Lift fingerprints, find clues, pick locks, solve puzzles and locate the bloody murder weapon.
Be warned though, the suspect has a plane ticket to the Carribean in an hour.
You’re on the clock to gather enough evidence before he slips your grasp forever!

The Art of Murder was my 102nd room in Australia and my 72nd room in Sydney.

Here are my thoughts on The Art of Murder:

·        when we arrived, we were greeted by the owner Alex and the experience started immediately.  We were new police recruits that had been called on to investigate and solve a murder.  The Art of Murder is one of very few escape rooms in Sydney where the game master is in the escape room with you.  This is relatively uncommon in Australia, with only a handful of rooms in Melbourne and Sydney using live actors as game masters.  There are some real benefits and some potential pitfalls to this, but more on that later;
·        the building is awesome and the room in which the experience takes place is uber cool.  It is a former art gallery and there is a really eclectic collection of art on every surface – this is the first escape room that I am aware of in Australian that is effectively inside an art gallery;
·        The Art of Murder is one of those rooms where a lot of consideration has been given to the back story (perhaps unsurprisingly given that Alex is a writer).  This really adds to the immersion level of the room (as does the room setting and the artwork);
·        there is a nice mix of hunt and seek fun as well as a mix of interesting puzzles to solve.  Over all, we finished the experience in about half the allotted time, so I would describe it as being a room best suited to beginners/intermediate players (although my experienced team certainly had a lot of fun).  Although the room is about a murder, it is not overly dark and I think it would be suited to younger players (with supervision);
·        there are some interesting elements to various puzzles.  Alex has clearly tried to incorporate some more authentic police investigation techniques into the puzzle and room design, again really adding a layer of depth to the immersion level.  Also, some of the puzzles were unique and of a type we had not seen in over 100 rooms before, which is always really nice;
·        as outlined above, the clue delivery system in The Art of Murder is by way of the game master being in the room alongside players.  Alex plays the role of a helpful police assistant, providing guidance to our team of new recruits.  If you have read my reviews of other rooms where game masters are inside the experience with players, you will see that whilst these can be some of the most enjoyable and immersive experiences, they do lend themselves to a simple problem – the removal of the barrier between players and the game master can sometimes result in it becoming too easy for the game master to provide guidance and hints.  In a more typical setting, it is not quite so easy for hints to be provided – game masters are physically removed from the space and normally a system of providing hints is put in place (where typically, players have to ask for hints).  This is not the case in an experience where the game master is standing beside you.  Respectfully, we found that at times, Alex was a little too quick to provide guidance (which in some instances, took away from our feeling of accomplishment in solving a couple of the puzzles).  This was partly our fault as I should have made it clear beforehand that given we are an experienced team, we prefer to try pretty hard to solve puzzles before asking for help.  I can appreciate that it is hard as a game master to know the solutions and to have to bite your tongue while watching players, but it makes such a big difference to the overall experience.  I think this is something that can easily be improved, perhaps by asking players ahead of time how much guidance they would like.  I have provided this feedback to Alex.

Overall, my team enjoyed REALLY our experience at The Art of Murder.  I would describe this room as a very immersive and cleverly written experience that is suited to players of all levels and is family friendly.

As always, the main test of a room is whether my team had fun and we certainly did have fun.  Subject to some tweaks to the hint delivery (which is something that could be very easily improved), this is a great, truly immersive room in a fantastic space.

Some players love high tech locks and automation (above all else) in escape room experiences.  Others, like my team, would prefer a low tech room with high immersion and a strong backstory.  This is definitely our kind of experience. 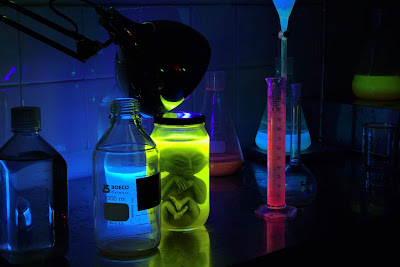 I recently found myself in Newcastle with some of my extended family members (who I haven't seen for years in some cases).  It was all very last minute, but I thought I would try and get into Unexpected Exit, an escape room outfit I had been trying to get to for over a year without success.

I called and the very kind game master offered to stay open after their closing hours to accommodate my team.

We were a team of 4 - me, my sister (who had tried 3 rooms), my cousin (2 rooms) and my older cousin, who had never been to an escape room before.

Given that our team was largely full of newbs, I asked to try Unexpected Exit's simplest room, The Deranged Scientist.  Here is a summary of the room from their website:

Professor Skoda has finally been captured – the mad genius behind the deadly outbreak of Virus X. In just under 100 days the virus has claimed millions of lives across the globe, with a cure still yet to be found. With the location of the Professor’s lab now known, your team has been selected to search the lab for the antidote. When your team arrives and enters the dimly lit room, the door closes and locks behind you. A plume of gas fills the air and a taunting note from the professor reads – “Enjoy your last 50 minutes on Earth…” This room is an excellent starting point for those new to escape rooms or an enjoyable challenge for the more experienced.

This was my 101st room in Australia and my 71st room in (or around) Sydney.

Here are my thoughts on The Deranged Scientist:

·         the room is a big space and immediately upon entering, there is a lot to see and do;
·         as far as the quality of theming goes, I think this room was about on par with the average room in Sydney.  It was clearly a commercial office space that had been reused for a science-themed room (but which could have just as easily been any other themed room).  The theming was left mainly to the props rather than to the wall treatments, etc;
·         the room theme of a deranged scientist, whilst not an entirely novel room theme (a similar theme has probably made up about 10% of the 100+ rooms I have tried to date), was fun.  The newbs in my team enjoyed the room theme and puzzles;
·         speaking of puzzles, there was a nice mix.  Some were a little “inelegant” (in that they were a little rustic and not 100% perfect), other puzzles were really strong.  There was one puzzle in particular that I can think of that was unlike anything I had seen elsewhere, which was great;
·         the room uses black light in a couple of puzzles.  Anyone who reads this blog knows that I am not a fan of black light UV torches in rooms (because they almost never suit the room theme – I generally find it lazy puzzle design).  That being said, the new players in my team didn’t care the slightest and they enjoyed the puzzles like any other (maybe I should get over my issues with black lights (although at this stage, it seems doubtful…));
·         there is a nice mix of hunt and seek as well as puzzle solving.  I was surprised that this room was pretty tricky – our team only just made it out in the 50 minute time limit.  Whilst this was largely due to our team not finding one particular hunt and seek piece, I do think that this room should have a 60 minute time limit rather than 50 minutes.  This room is clearly aimed at a beginner level (and given it is the only current escape room outfit in Newcastle, I think they are right to aim for the new player market with at least one of their rooms).  The extra 10 minutes would greatly increase the escape (and reduce the number of hints required for newer players);
·         the clue delivery system isn’t great in this room – you ask for hints and a piece of paper is passed under the door with the hint scrawled on it.  This kind of thing breaks the immersion of a room and whilst this was more common when escape rooms first came out in Sydney, most now utilise the voice of God system (or other methods that are even better suited to the theme).  By memory, teams are entitled to 3 hints in The Deranged Scientist;
·         the most interesting props in the room were unfortunately not really used (and were more window dressings).  This was a little disappointing; and
·         this room is child friendly – there are no scary aspects at all.  There is also a lot of space in this room, so although I would recommend a team of 4 players, you could probably go as many as 6 players given the space.

Overall, my team enjoyed our experience at The Deranged Scientist.  I would describe this room as a solid beginner room, suited more to new or younger players.  The quality of the theming is not on par with some of the magical rooms that we have here in Sydney (and many in Melbourne), but this is something that newer players are unlikely to care too much about.

A nice touch is that at the end of the experience, you get a small polaroid photo of your team which you then get to stick anywhere in the premises that you like.

As always, the main test of a room is whether my team had fun and the answer was that yes, we definitely had fun.  I look forward to taking my more experienced team back to try Unexpected Exit’s other three rooms, which I understand are much more difficult.