Break the Code Plus - Lost Review 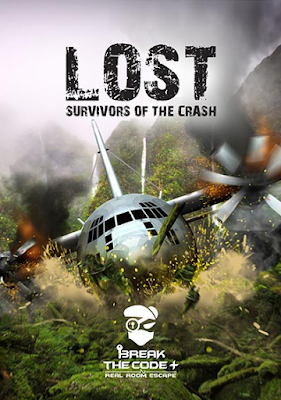 My usual fellow escape room buddies and I (4 adults in total) tried this room very late on a Friday night in December.  This was our 23rd room in Sydney (and our 33rd room in Australia) so far…

Having previously tried 3 other rooms at Break the Code Plus, my expectations going in were set pretty low.

First off, I'll say what I enjoyed most about the Lost room at Break the Code Plus:


1.     Their front of house and assistance when booking were excellent.
2.     The theming was really strong – definitely the best themed room that they have on offer.  The props and “room” are really cool.
3.     We had a really enthusiastic game master, which was great
4.     The puzzles in this room were really clever –a god mix of hunt and seek fun, puzzles that for the most part really suited the theme and the level of difficulty was really challenging for our pretty experienced team.
5.     They have been listening to feedback and now they rely on walkie talkies and unless there is a real problem, the game master does not enter the room;
6.     All of the puzzles worked well and as they were intended.  We saw some puzzle mechanisms in this room that we had never seen before elsewhere.
7.     We were handed a photo of our team after our escape - this is a nice touch and by memory, Mission Sydney is the only other room that hands out photos after the escape.

If you have read any of my earlier reviews of Break the Code Plus, you will know that I wasn’t a fan of their other rooms (other than Indiana Jones, which was fun).  We had technical issues, rooms not having been reset properly, average theming and some VERY clunky puzzles with poor execution.

I am pleased to say that this room was MUCH better than all of their other rooms combined.  I really liked the theme and the variety of puzzles.

It’s a difficult room – in the several months since they opened, only one team had escaped at the time that we tried out the room (and that team escaped with less than one minute to go).  We got pretty lucky and managed to escape with 8 minutes to spare.

I really liked this room – it wasn’t perfect, and perhaps it’s partly because I went in with such low expectations, but I really enjoyed the room.  I would rate it in my top 10 rooms in Sydney.

1.     There was a puzzle that did not fit the theme (laser puzzle in a plane crash theme) – this puzzle was also unclear and I broke it about 30 minutes before I was intended to get the solution a different way.  Thankfully we still had to complete other puzzles before the final door would open, otherwise we would have been out in about 20 minutes tops.  They should ditch this puzzle I think.
2.     There was a logic puzzle in the room that was a little clunky – it made sense when it was explained to us, but it didn’t feel like a satisfactory explanation.  Also, there was another puzzle which was not explained well (and due to this, we had to re-do the puzzle which took ages).  The game master was also not able to explain this puzzle solution, which was a shame.
3.     We had a technical issue with one puzzle that didn’t work the first time (we are all certain we entered in the code correctly the first time – this wasted a couple of minutes).
4.     Their price (without a discount coupon) is $180 for 4 adults.  This makes them the most expensive escape room outfit in Sydney (equal with Mission Sydney's Dr M, which is a far superior room).  Whilst this is a really good room, it is not up there with the likes of Enigma Room, PaniqRoom, Mission Sydney, etc, so this price tag is simply far too much.

So in conclusion, this is the pick of the rooms at Break the Code Plus, but it is a very difficult room.  Beginners should not bother because they will probably end up frustrated by the puzzles.
I’m glad I went to this room – I had heaps of fun.

Overall Summary:     A strong room but only for experienced players.

This post will be a little different to my usual posts.

Breakout EDU is a concept that James Sanders, a teacher in the States came up with.  He attended an escape room with his teenage students and was amazed at how engaged they all were while trying to escape – a level of engagement he wanted to replicate in the class room.  So he came up with the idea of Breakout EDU, which is, in essence, an escape room in a box.

The primary purpose was intended for classrooms, but anyone who has tried an escape room will realise pretty quickly that is has much wider appeal.  In a nut shell, you buy a box from Breakout EDU (boxes are currently only available in the US, but they hope to make them available here in the next few months).  The standard box comes with an assortment of items - padlocks, word locks, speed locks, etc, UV lights and pens, smaller combination safes, etc.  It’s effectively a DIY escape room kit.

Breakout EDU is also all open source.  The idea is that teachers (and others) around the world design their own backstory and puzzles (eg Shakespeare based rooms, Year 10-12 mathematics based rooms, etc).  Those room designs and puzzles are then uploaded and anyone around the world can use them (or adapt them as they see fit), using the list of locks/items in the standard box.  There are already a dozen or more themes on their website, but I expect this number grow exponentially in the next year or two.

For those of you who have never heard of one before (like I hadn’t), the Breakout EDU boxes also come with a hasp.  This is a hasp: 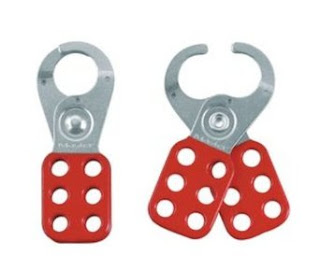 It’s really cool.  You close the hasp over the staple on the Breakout EDU box (ie the locking mechanism on the outside of the box) and this allows you to have up to 6 separate locks on the box.

The launch was hosted by Google at their very cool Google HQ (their reception has a wall of greenery, a tyre swing and the meeting room I saw had tables and chairs on the ceiling).  It was uber cool.

The leaders on the day, Kim and Nick, explained what Breakout EDU is to the audience of about 25 adults (mainly teachers and a few escape room enthusiasts).  Speaking of which, it was cool to meet Essa from Intervirals (another escape room blogger who told me about Breakout EDU) and the lads from Enigma Room.

We then had 45 minutes to escape the Time Warp challenge.  I won’t go into details (again, I hate spoilers), other than to say that after having done so many escape rooms, it wasn’t quite at the level of a refined escape room.  For example, at times you were handed the next puzzle after solving one (rather than discovering this yourself in a box or hidden in the room).  There were some red herrings thrown in and over all, the immersion level was relatively low.

But it was fun and I think it gave everyone in the audience a flavour of what an escape room in a class room could be like.  On the negative side, there were definitely too many people in the room to all be fully engaged.  At one point, about half of the audience sat down and seemed to either lose interest (or gave up trying to see past the group of people gathering around the Breakout EDU box or puzzles).

I think in a class room setting, you would definitely need to limit teams to 8 people max, or have multiple boxes within a room.  However, in an escape room context, I can see the idea of an escape room in a box being really popular.  Who hasn’t gone into an escape room and thought “I could design one better than this!”?  Well, now you can.

I have bought my own box (well, I have compiled my own).  I bought a $19 galvanised metal case from Bunnings, screwed in two separate hasp and staples (so that I can have up to 12 locks on my case, together with the built in keyed lock).  I then bought about half of my locks from Amazon and the other half from Bunnings.  Again, given that Breakout EDU is open source, they have helpfully put a list (and a link to Amazon) of each of the items that come in the box (see their list here).  This is the standard box I got from Bunnings (which I have since decked out): 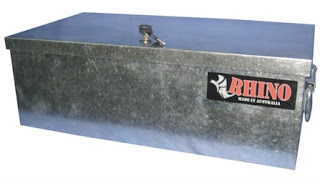 My Amazon goodies are coming any day, which I am looking forward to.  I’ll post another photo here once I have received everything so you can see the kinds of locks that come with the box.

I have been spending the past fortnight designing my own escape room for my usual group of escape roomers (my wife and 2 friends).  It’s heaps of fun, given that I know the players well and can therefore adapt every puzzle to them.  The part I hadn’t appreciated is how much work it is!  I am probably about 75% done and it has taken more hours than I care to admit – each puzzle is designed from scratch, the back story video, the puzzle sequencing (ie solve puzzle A, which opens Padlock A, etc).  It should be good - not nearly as good as a high tech escape room, but hopefully it will make up for that in the detailed, bespoke puzzles I have designed).  It’s my Christmas gift to them all, so I need to get cracking!

I look forward to trying out a few other standard Breakout EDU games in the future, as well as my friends checking out my own design in the next couple of weeks.  I’ll report back with photos once they have tried my puzzles.

Breakout EDU is a really cool idea that will no doubt help to make kids more engaged in school.  For real escape room enthusiasts, it will also be a cool way to step into the shoes of an escape room owner and designer.

Click here for the link to Breakout EDU's site.  Also, click here for a link to their video which explains what they are all about.