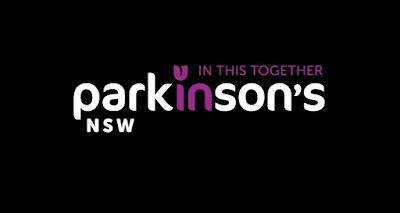 This post is a little different to my usual escape room review posts.  Earlier in the year I saw a post on a Facebook group I'm a member of asking for experienced players who would be interested in beta testing a pop-up room that would be opening later in the year.

The details were all pretty vague but we thought why not, let's check it out. It was our 93rd escape room experience in Sydney and 141st experience to date.

We went to a studio in the inner west one Saturday morning in early April.  We were the first group of beta testers for the day.  A sound guy put microphones on us all and off we went into a little old sound stage/warehouse.

The experience was really interesting.  The "escape" consisted of 2 separate rooms.  The puzzles were relatively straight forward, but all centred around a common theme which only became apparent after we had finished.  One puzzle contained wire inside shoe laces, which made it difficult to untie the shoes (to retrieve a key).  Another required a pipe to be filled with water via a teapot of cold water, but the teapot was attached to a thick elastic (so that it took some effort to stretch the elastic as required).  Another puzzle used a computer but all of the keys when typed in were incorrect.

At the end of the 20 minute experience, we opened a door that explained that the experience was not a beta test for a pop up escape room, but was instead part of an awareness campaign for Parkinsons NSW.  Each of the puzzles were designed to replicate challenges faced every day by those suffering from Parkinsons, many of whom we learned were quite young.

Our team was then interviewed after the experience about the escape and our knowledge generally of Parkinsons.

This was a really interesting experience.  It was the last physical escape room-type experience that my team did prior to the 2020 Covid lockdown. 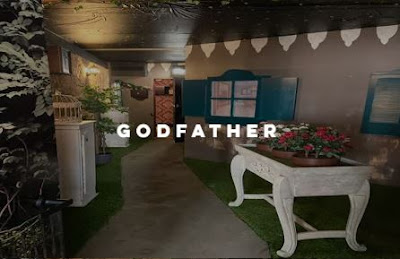 This review is incredibly late and overdue – apologies to Akos and Martina that it’s taken me so long to write up this review.

My usual fellow escape room buddies and I (4 adults in total) headed back to Paniq Room in January 2020 to check out their new rooms House of Jumanji and Godfather.  You can read my review of House of Jumanji here (and my previous reviews of their Supercell 117, Abandoned Military Bunker and S3NS3S here, here and here).

Godfather was our 140th room (and our 92nd room in Sydney) to date.

My team has always loved Paniq Room’s rooms.  It had been almost 4 years since my team had been to Paniq Room, which was back when we played S3NS3S in April 2016.  We were VERY keen to come back and check out their latest rooms.

Godfather has the following room summary on their website:

There is a rat in the family who has betrayed Godfather, the head of Corleone family. He has fallen in love with the daughter of a rival mafia-boss, Tattaglia. He has stolen an important tape from their previous payoff action and gave it to the rival mafia family to earn their trust. He must return it immediately before Godfather finds out that it was copied. He has called upon your help to infiltrate and smuggle the tape back to the safe in the godfathers house.

Can you find the hidden key in the garden to enter the notorious office?

The Godfather's family is at a christening today along with the Rat so you only have one hour to complete this difficult task otherwise the Rat is revealed and you all sleep with the fishes! Good luck and god speed.

As always, I will start with what I liked about Paniq Room’s Godfather room:

As for the parts of Godfather that we think could be improved, there were 2 aspects that we raised with Akos.  The first was an early puzzle that contains markings/hieroglyphs.  We didn’t think the solution was as clear as it could be – we lucked onto the solution and when we were shown the solution after we escaped, it didn’t quite feel like a perfect solution.  There was also one other puzzle element that we all saw but which we all thought was something we shouldn’t touch (and we therefore didn’t).  I think this could probably be addressed by signposting or maybe the initial briefing from the game master.

Nevertheless we all enjoyed Godfather.  Akos tells me that the theming is based on a particular famous scene from the Godfather movie (but having not seen the movie I can’t really comment further).  The room was nicely designed, with a frightening amount of puzzles to do in the second half (which really got the adrenaline pumping). 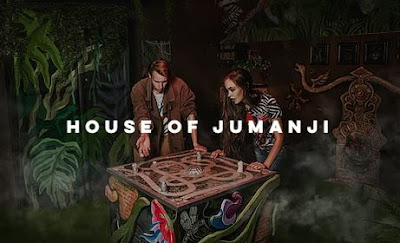 This review is incredibly late and overdue – apologies to Akos and Martina that it’s taken me so long to write up this review.

My usual fellow escape room buddies and I (4 adults in total) headed back to Paniq Room in January 2020, having previously been there to check out their Supercell, Bunker and S3NS3S rooms (and loving them all).

House of Jumanji was our 139th room (and our 91st room in Sydney) to date.

My team has always loved Paniq Room’s rooms.  It had been almost 4 years since my team had been to Paniq Room, which was back when we played S3NS3S in April 2016.  We were VERY keen to come back and check out their latest rooms.

House of Jumanji has the following room summary on their website:

You have heard sounds of distant drumming from a dark corner of your new house. The drumming grows louder as you move closer to a mysterious ancient board game...strange carvings on the board say "A game for those who seek to find, a way to leave their world behind". You roll the dice to move your token. Strange sounds and mysterious animals appear in every corner! Your next steps determine your fate, find the word and say! Can you escape before it's too late?

As always, I will start with what I liked about Paniq Room’s House of Jumanji:

As for the parts that we didn’t like so much with the room, I have nothing much to report here.  All of the puzzles worked well and made sense in the space.  The only thing (which is minor) is that one of the final puzzles felt like it had 2 puzzle answers squished into the one puzzle.  I think that particular puzzle could have been split up into 2 separate puzzles.

We really enjoyed House of Jumanji. It is a beautifully themed room with some high and low tech puzzles that I think would suit a really broad range of teams.  This is one of the few rooms that I would love to take my daughters to because  I’m sure they would love it (and it’s not too scary for them).

What a year it has been, eh?  My family and I are VERY much looking forward to bidding 2020 farewell in a few weeks’ time, as I am sure are many of you.  My family spent 9 months of the year on complete lockdown, effectively not leaving our house unless absolutely necessary.  That included home-schooling our girls, which was a challenge!  But we have survived it.

Whilst my team has not been to any escape rooms since January, we have done a few online rooms together (and I have tried about 15-20 online rooms with other escape room enthusiasts from around the world).

In the chaos that has been 2020, I have been pretty hopeless in writing up my escape room reviews.  I am challenging myself now to write them all up before the end of the year (which means I’ll need to post several each day). Fingers crossed...

To the room owners who have been waiting on my reviews – I’m sorry it has taken so long and thanks for being patient.

I’m really pleased to confirm that my team is getting back out there and will be hitting more rooms in Sydney over the summer break (including some as early as next Tuesday)!  I have also been trying to organise a trip to Canberra to check out their escape room for over 4 years and it’s finally happening in January!

So, watch this space for more room reviews.