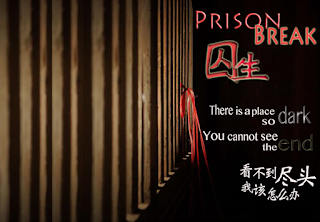 My group of friends (4 adults) checked out Room Escape Sydney (also known as “Escape Club”) in August 2015.  This was our first time here.  We tried their Prison Break room, which was our 16th room in Sydney so far. I had been putting off trying any of their rooms due to the dismal reviews that I had read on TripAdvisor and Facebook, but I figured I should see it for myself….

When you book online, you pay a $30 non-refundable deposit.  You then pay the room fee on arrival and provided you don’t damage their room, the $30 is refunded at the end of your escape.

We found the place pretty easily and managed to get street parking right in front of the place on the main street (Gardeners Road).  There was nobody in reception when we arrived, so I gave them a call and they then came down the stairs, took our money and walked us up the stairs through an old, run down building to the end of a hallway.  They then asked us to read the note on the wall, which explained the back story (in broken English).  This was all what I was expecting, as 90% of TripAdvisor comments had commented on this aspect.  We then were let into the room and told that we had 60 minutes to escape.

Now faithful readers, you have probably noticed that I do not generally include spoilers in my reviews.  However, I was so utterly disappointed with this room, that I want to do all that I can to prevent others from wasting their money on this place.  And to properly convey the reasons why I so disliked this room, I need to go into the detail of the puzzles and theme. So...

***SPOILER ALERT - IF YOU READ ON, YOU WILL READ SPOILERS***
(You have been warned!)

We were taken into the room and locked into a poorly constructed jail cell against the far wall.  I'm not a chippy (in fact I am pretty hopeless with that kind of thing), but I could have build a better jail cell wall than what was on offer at this place.  Anyway, I'm probably just being picky on that point - the bars served their purpose.

The quality of the puzzles and other items in the room was very poor.  The theming was also pretty poor (there were various items in the room that didn't make sense at all).  They were also too cheap to include a count down clock - we were instead left to set our own clock on our phone.  This is the only room I can think of that didn't have a countdown clock of some description (whether the typical red clock on the wall, on an iPad, etc).  It was cheap.

We found a torch and the batteries did not work at all.  They were dead.  I think they were the same batteries that a group used 6 months before us (because they also commented that the batteries didn't work at all).  That wasn't the end of the world (as we tried this room in the afternoon and had a reasonable amount of light coming in through the windows).  It was just annoying and a sign of a poorly managed room.

The owners have no system to allow you to communicate.  Instead, they require you to get out your mobile phone and call them on their land line.  This again is poorly managed.  As far as we could see, there were no cameras in the room so the owners had no clue what we were doing in the room.  Apart from the fact that this is just laziness on their part (and poor management), it's also not safe.  Others on TripAdvisor had commented on how unsafe and dangerous this place is.  On reading those reviews, I honestly thought that the reviewers were being a little over the top.  They weren't - this place is incredibly unsafe.  All of their electronic puzzles have exposed wires running all over the place.  You reach in to feel around within a dark cupboard and you can feel so many exposed live wires, which really is dangerous.  Apart from the smoke alarm thing, others have complained that they were unable to escape the room and had to knock for up to 30 minutes before the owners came into the room to release them.  This place is a WH&S nightmare!

Over all, the puzzles were clunky and unclear.  It seemed to us that some of the puzzles were laid out in the wrong order (as we seemed to complete them in an illogical order).  The clues on the walls were unclear.  The quality of the locks and mechanisms was also poor.  You could see that they had a few decent ideas (although by no means novel compared to their competitors), but their execution was lazy and cheap.

My biggest annoyance of all was one particular puzzle which required you to find and assemble a cross-bow and use it to shoot arrows.  You had to shoot an arrow at a particular target a few metres away and if you hit it, the target will fall over and reveal a code that you need to progress in the room.  We initially found a bow and the arrows, so I had a few goes trying to hit the target (without realising that if I had waited to find another piece of the cross-bow, my accuracy would have greatly improved).  The cross-bow was hand-made and was very inaccurate - it took several goes at getting the parts to stay still without slipping.  What annoyed me was that we shot the 3 arrows and of course missed the target, but we COULDN'T RETRIEVE THE ARROWS!! I called using one of our hints and they said you get three tries and that's it.  This is a fatal error in this room.  I have never before been in an escape room where you can break the game and then leave yourself high and dry.  When I was on the phone asking for a hint and the owner/manager told me that you only get 3 attempts, I had a go at him.  He told me that when others miss with all 3 arrows, they have to phone and are simply given the code over the phone.  I said that this wasn't good enough, so he begrudgingly came in the room and picked up the arrows and passed them to us.  This of course ruined the flow of the game (not that it was overly immersive in any way), but better that than the alternative of being told the code over the phone.  Luckily we managed to hit the target with those 3 arrows on our second attempt, but the idea that you only get 3 goes is utter garbage.

The remainder of puzzles didn't make a great deal of sense.  They were very loose and clunky.

We escaped this room in 43 minutes and I can honestly say that of the 4 of us, none of us enjoyed any aspect of this room.  They also had a small box that was an "additional puzzle" that we weren't required to solve in order to escape the room.  We spent the next 17 minutes trying to figure out this puzzle and were ultimately unsuccessful.  When the owners told us the solution, I think I audibly sighed - not because it was clever, but because (much like the rest of the room) it was just shite.

This place doesn't care about safety, room design, theming or professionalism.  They have some reasonably good ideas that are executed very poorly and this room in particular has an inexcusable flaw.

We won't be back here (in fact, I wish I hadn't wasted my money on this place).  I sincerely hope that others are put off going to this place by this blog - the thought of which makes me feel a little better about wasting our time there.

I love good escape rooms - the more the merrier as far as I am concerned.  However, crappy escape rooms don't deserve your patronage. There are so many better escape rooms in Sydney to try than this poor excuse of an escape room.  In fact, all 15 other rooms I have tried in Sydney were considerably better than this room!