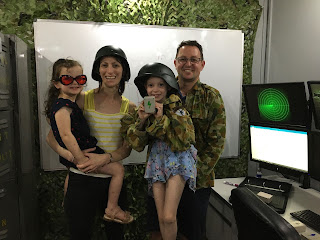 Narrow Escape Rooms is family-owned and run escape room business based in Penrith (which, incidentally, is where I (and the other 3 members of my escape room team) went to high school).

I was really pleased to hear that some escape room enthusiasts had formed the Narrow Escape Rooms business and had opened up shop in Penrith.  Back before they opened, my team had tried to get there to beta test their first room, "Launch", but unfortunately my team wasn't available at the time.  Fast forward to November 2019 and I was finally able to check out Launch.

This time it wasn't my usual team of 4 adults - we were instead 2 adults and 2 kids (ages 3 and 7yo).  My daughters have been to more escape rooms than most adults, and my eldest in particular is pretty good at helping us solve puzzles and at finding items.

We spent some time before and after the room talking to 2 of the owners of Narrow Escape Rooms - Shelley and her brother Craig.  I always love a family-owned and run escape room, particularly where the owners design their rooms themselves (which I am sure must be so rewarding).

Launch was our 134th room to date and our 86th room in (or around) Sydney.  Here is the room description, from their website:

Aliens have arrived and they want to do more than just phone home. Systematically the world powers have submitted due to the massive destruction within only minutes of their arrival. The trajectory and speed of the Mothership shows Australia is the next target, soldiers have left their post, the hostiles will be here within the hour. You are a special forces team sent in to restore our defences, can you get our missiles online and stop the alien invasion?

Here is what we thought:


Launch is a great room and I am really pleased that I can now recommend it, particularly to newer players and families.

As always, the true test of a great room is whether we had fun.  I asked my 7yo what she thought of Launch.  Her response was that she “really, really liked it” and when I asked her what her favourite part was, she said “everything”.  That’s pretty high praise (particularly given she has probably been to over 20 rooms (across 3 Australian states and in California))…  I’m happy to report that my wife and I also really enjoyed ourselves in Launch too.

I'll be back shortly to check out Narrow Escape Room's second room, entitled "The Inheritance".  I understand that The Inheritance is more challenging than Launch and it's longer (at 75 minutes).  I’ll bring back the adult team next time and as always, I’ll post my review here.

Shelley and Craig also told us about the Escape Bus in Penrith, which has 2 escape rooms (you guessed it), inside a bus.  They told us that the rooms there are really strong (with excellent theming), so I am going to check ithem out in January hopefully.

Given there are now a couple of great escape room businesses in Penrith, it’s definitely worth the trip to check out a few great rooms back to back!