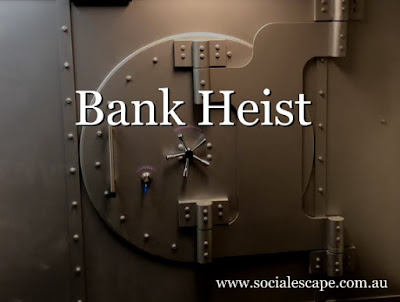 My team returned to Social Escape Rooms in May 2018, having last been there in January 2017 when we did both their Paris Escape and Baker Street rooms back to back.  You can check out my reviews of Paris and Baker Street here and here.

The last time we were there, I tried Paris as a solo player and then the "lite" version of my usual team tried Baker Street (in that we were a team of 3 rather than the usual 4).  This time, all 4 of us were on hand to try the formidable Bank Heist room that we had heard so much about (and for so long).

I had booked the room about a week or so out.  Then, on the day of our escape, I saw on Social Escape Rooms' Facebook feed that Mark (the owner) had also invited Ana and her team from Lock Me If You Can to try out Bank Heist on the same day as my team (in fact, Ana's team was trying Bank Heist and then immediately after, it was my team's turn).  Little did either Ana I know that Mark had decided to run a poll on his Facebook feed to see who everyone thought would win between Ana's team and my team.  He had pitted us against each other as long-term rivals (even though, for the record, Ana and I weren't and aren't).  I am a regular reader of Ana's blog and always enjoy reading her thoughts on rooms I have tried (and looking for recommendations from her in relation to rooms that I haven't yet tried).

When we arrived to do our room, Ana and her team were literally walking out of the Bank Heist room and into reception.  It was great to finally meet her and her team.  I tried to find out whether they had escaped the room or whether they asked for any clues, but they wouldn't say.  The pressure began to build...

So without much waiting around, we said goodbye to the Lock Me If You Can team and we headed into our briefing for Bank Heist.  Little did we know that Ana was going to stick around and watch our team try to escape from Bank Heist via the game master's desk...

Bank Heist was our 95th room in Australia and our 65th room in Sydney.  As always, I'll start off with what I liked most about Bank Heist:

·        the room is very well designed.  The room flow is excellent - it is a really nice non-linear room with logical points of convergence.  My team members and I were VERY busy during the entire escape - the fact that the room is largely non-linear meant that we could split up and attack different puzzles solo or in teams of 2, rather than all 4 of us working on the same puzzles together;

·        the theme is great.  Who doesn’t enjoy a mission impossible style bank heist?  The quality of the props and theming was great.  The craftsmanship that went into various elements of the room was also really impressive;
·        on reflection, there was not a huge amount of hunt and seek in this room.  My team’s weakness has always been the hunt and seek element – many times we have been slowed down by not finding a hidden key, puzzle piece etc that is more often than not hiding in plain sight.  So the relatively small amount of hunt and seek in this room suited my team pretty well;
·        those who love tech will love this room.  Whilst there are some older style locks, there is a lot of tech in this room too (some of which is on display and some of which is well concealed);
·        this room is on the difficult end of the spectrum.  There are three main reasons why this room is so difficult:
o   simply put, there are a lot of puzzles to get through in the 60 minute time limit;
o   the secondary challenge; and
o   the hints rule (with respect to the secondary challenge);

·        on the first point, as I mentioned earlier my team was VERY busy during our escape.  There is no time to sit down and relax in this room – it is pretty full on;
on the second point above, for those who aren’t already aware, there is an “opt in” additional challenge in Bank Heist.  The primary mission is to retrieve a diamond.  The secondary mission is to retrieve both the diamond and a wad of cash in the bank vault.  The first team to escape within 60 minutes with the cash and diamond will get to keep the wad of cash, which totals $500 [Note – in the month or so it has taken me to write up this review, the cash has now been won (by a very clever 4 person team).  I think though that Mark is considering putting up another $500 for the next winning team];
·        the third and potentially hardest aspect is that players who would like to go for the cash prize are not allowed to ask for a single hint.  The very second that players ask for a hint, they are not able to attempt to go for the cash prize (very cleverly, the game actually changes and the cash prize is literally (and figuratively) out of reach);
my team was able to get to the diamond at about the 45 minute mark, which left us 15 minutes to try for the cash.  I had been warned by some other escape room owners who had tried this room that it is best to focus on the primary objective before attacking the secondary objective of going after the cash prize and I think in hindsight that was good advice; and
·        despite our best efforts, we were unable to get the cash in time.  We were down to the final puzzle but it wasn’t to be.  [Our hats are off to the team that subsequently escaped with the cash – it was not easy at all so congratulations to them!].

On the negative side, I really have nothing to report.  There was one puzzle that we managed to solve without a vital puzzle element (much to Mark’s surprise!).  I will suggest a tweak to Mark on this puzzle, as well as a couple of other minor prop/theme tweaks – all minor stuff.

This was a fantastic room.  Our team really enjoyed ourselves, even despite the added competitive pressure imposed on Lock Me If You Can and our team by Mark (thanks Mark!).

I’d recommend this room to all group types (although more experienced players will no doubt find that they have a much greater chance at going for the cash prize).  It’s also one of the few rooms in Sydney that is not scary at all and is therefore suitable to families too.

Overall Rating:      A fun but challenging room full of great puzzles and theming