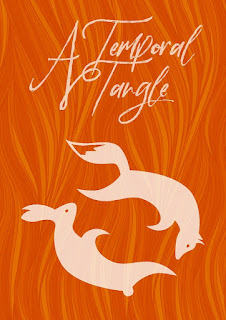 After having caught up with Leanne and Aaron from Next Level Escape at PAX, I learned that they had purchased the Enigma Rooms business and were busily constructing a new room there called Temporal Tangle.

Time travel is my all-time favourite theme for an escape room (and Goonies, but that really goes without saying)…

So when I heard about the new room, I was hooked.  Temporal Tangle replaces Enigma Room’s Dr Disaster room.  We checked out Temporal Tangle in late November 2019.  The last time we had been to Enigma Room was when we did their Dr Disaster and In Memoriam rooms back to back in March 2015, so it was something like 4 years and 9 months between drinks.

The place hadn’t changed much at all.  My team had hoped to go back to Enigma to check out a new room for years, but unfortunately the previous owners never created a third room.  I caught up with Barry and Matt (the then owners of Enigma Room) a few years back at Google HQ (for an escape room in a box event) and they told me that they were working on a third room.  Unfortunately, that obviously didn’t eventuate.

My team have been to a lot of escape rooms and we really enjoyed ourselves.  We managed to escape Temporal Tangle in a pretty good time (I have forgotten our exact time but I think it was around the 30 minutes mark).  So perhaps for more experienced players, the room could have had an extra puzzle or two to extend the awesome fun but we very much loved the experience.

I’m not sure how to mention one aspect of this room without giving away spoilers, but back when I was at PAX, I was chatting with Leanne and Aaron about escape room ideas that I had and things I really hoped to see one day in an escape room.  Well, wouldn’t you know it, one of my ideas made its way into Temporal Tangle and it’s frikkin' AWESOME.  They also left this note for me in the room: 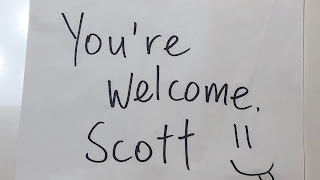 This was a highlight for me in particular, but I hope other players will get a kick out of it too - it is something that has not been done in any room in Sydney (that I know of) ;-)
Temporal Tangle is definitely a room that I will be highly recommending – it is a particularly great room I think for newer players, and it is family-friendly.

As always, the best test of a great room is whether all of my team members enjoyed the experience – not surprisingly, we all loved Temporal Tangle.